Dune the Damn Thing: We are all-in on the new ‘Dune’ franchise

We both approached the new “Dune” movie with bit of skepticism, but now that we’ve actually seen it? Hoo-boy, we are all-in on this new vision of Frank Herbert’s legendary sci-fi/fantasy series–one where frankly director Denis Villeneuve just styles on everybody who has tried to make a “Dune” adaptation in the past. This movie represents the best-case scenario of how to get cool shit made amid the current landscape of Hollywood. Plus, Kraken Up and VERY SERIOUS RANKINGS: Which MMA fighters do you think could keep their hand in the box for longest?

Hear a five-minute excerpt from “Dune the Damn Thing”:

Want to listen to the rest of “Dune the Damn Thing”? Join the team at our Patreon.

Good news, you guys. We finally got our offshore casino up and running. And after a lot of bribes and kickbacks and at least one failed coup, we are ready to... 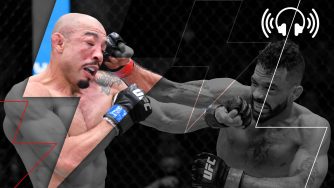 The UFC offers up the final PPV of 2021, with two title fights on the main card at UFC 269. Charles Oliveira defends his lightweight title against Dustin...

Are we ready to revise some of our bullshit previous opinions about Jose Aldo yet?

Time doesn’t work the same way in the fight game as it does other places. It’s like that water planet in “Interstellar.” An hour or two is sometimes the...