Your bench press max was never the problem, Jon Jones

No. He. Did. Not. Please tell me this man did not go get himself arrested in Las Vegas in the wee morning hours, then return home amid reports that it was all over an extremely ugly domestic violence situation, all just so he could post a damn workout video to Instagram set to the tune of the song from “Toy Story.”

Dude. Jon Jones. What the fuck, man? How is it possible that you continue to miss the point so thoroughly and completely?

You knew he was going to say something. He had to. Reports were everywhere following his arrest on charges of domestic battery and vehicular “tampering” (which sounds a lot cooler when you picture Eddie Murphy in “Beverly Hills Cop,” putting a banana in the tailpipe and riding off like lol, rather than what allegedly really happened, which was Jones headbutting a police cruiser). He made bail and got back home just in time for the police report to surface, which is when we found out that it was allegedly one of his children who asked the hotel staff to call the police.

So what’s he have to say for himself now? This. A video on Instagram in which he is bench-pressing to the tune of the Randy Newman joint “You’ve Got a Friend in Me,” surrounded by text in which he claims he’s quitting drinking and is ready to “turn this nightmare into the best thing to ever happen in my life.”

“Now is the time to work harder than ever,” he writes. “What the devil means bad, God means for good.”

And of course: “Get right back on my horse.” As if the big concern is that this latest arrest might fuck up his gym schedule.

You know what’s missing here? Any mention or acknowledgement that his actions have negatively affected people other than him. The police report sets a scene where his longtime fiancee, also the mother of his children, is standing around with blood on her face and clothes, telling people she’s scared to go back into the hotel room with him there. His child is the one allegedly asking for the cops to come. So yeah, that does sound like a nightmare … for them. Not sure how you getting right back on your horse in the weight room is what’s going to help that.

Feels like years we’ve been waiting for Jones to get his shit together, grow up, and stop being MMA’s most gifted problem child. Also feels like years of him shooting himself in the dick over and over again to drive home the point that that’s never going to happen. Now we’re left to sit with this image of him allegedly terrifying his own family on the same night that the UFC honored him in a hall of fame ceremony, and his answer to all this is to assure us that he’s still hitting the gym hard while swearing off alcohol.

Man, that’s just not even anywhere close to the right response here. If you didn’t know better, you’d think he was referring to something that happened to him rather than something he (again, allegedly) actively did. And maybe that is genuinely how he sees it. But if so? Shit, that might be the most worrying thing of all. Because it makes you think he’s nowhere near figuring any of his own bullshit out, which means it’s only a matter of time until we’re right back here again. 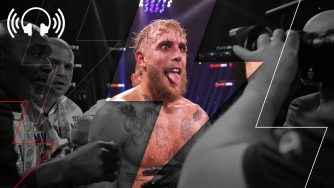