Why do people get so weird about Joe Rogan?

For a moment there, after seeing people like Daniel Cormier and Michael Bisping tweet out their blanket support for Joe Rogan seemingly out of nowhere this week, I thought maybe Rogan had been diagnosed with cancer or some shit.

Wait, I thought, why are we all talking about Rogan all of sudden? He didn’t even show up to the last UFC pay-per-view. Is he dying? Did his COVID case take a turn and he’s somewhere on a homemade Onnit ventilator and so people are offering up thoughts and prayers?

See, this is what happens when you rely on Twitter as a news source. You join the discourse already in progress and have to try to reverse-engineer your way to some understanding of what the hell is happening. It’s one of the many shitty things Twitter has done to my brain. It’s why I know the Supreme Court is up to something before I know what that something is. It’s how I know some celebrity fucked up just by the sheer number of jokes roasting him before I ever know why. It’s how I even know the Met Gala is a thing that exists, and I’m still pissed about that.

Now it seems like almost every day Twitter wants to plunge me into some sort of Joe Rogan discourse.

Near as I can tell, this latest round of Rogan Studies was kicked off by Trent Reinsmith’s opinion piece on Bloody Elbow, essentially arguing that the UFC doesn’t need Rogan on commentary anymore and should give that spot to someone else. So yeah, you can guess how that went over.

People get weird about Rogan, man. Fighters fucking looooove him, as we learned doing our fighter survey for The Athletic. Fellow UFC broadcasters, from Jon Anik to Laura Sanko, will readily step up in his defense either because they really do like and respect him as a colleague or because they have more sense than to talk shit, either actively or by omission, about the richest and most famous member of the commentary team.

And for the portion of fight fans who are also hardcore Rogan podcast fans, supporting him has basically become a part of their identity. In the last few years the idea of the Rogan-loving dudebro has become basically a goddamn meme all on its own. There are women on dating apps who will tell you it’s one of their top red flags to avoid in men. There are Reddit dating threads of women wondering how to handle dudes they’re seeing who keep sending them Joe Rogan links. (Side note: Gurrrrrl the real concerning thing here is that he is not listening to you and you don’t need that in your life.)

In certain circles Rogan fandom has become a cultural shorthand for a certain type of half-informed, comment section libertarian lunkhead. So if you’re someone who listens to and enjoys his podcast, you probably resent that. Then you either you have to hide your fandom like a secret shame, or you have to wave that red flag proudly in the faces of all the sheep who are too afraid to QUESTION EVERYTHING.

Point is, it’s hard to just talk about the job Rogan does as a UFC commentator without also talking about all the things Rogan has come to signify and represent both for his own audience and for the people who only ever hear about his shit secondhand. Whether he wanted this or not, this is the cultural space he’s come to occupy. (That space also apparently comes with hundreds of millions of dollars, so maybe he can’t complain.)

Plus, for a lot of MMA fans he is the voice of the UFC, if not the entire damn sport. They think about their favorite MMA moments and they hear Rogan going, “OHHHH HE’S HURT!” They remember when they were new to all this and it was Rogan who actually took the time on the broadcast to explain how a fucking D’arce choke works. He was one of the only people who could straddle that line between recognizable celebrity (“News Radio” was criminally underappreciated there I said it) and genuinely knowledgeable guide to the world of this sport.

He’s not just the “Fear Factor” guy, you can almost picture some newbie fan shouting into a date’s face at a loud college bar circa 2007. He actually fucking trains.

Also, let’s not forget that there was a time when the UFC was sort of a low-rent joke to a lot of people – the kind of bloodsport that only psychopaths and mall rent-a-cops would watch as their goateed faces hovered above microwave dinners in grim studio apartments – and Rogan’s involvement and articulate advocacy for the sport truly did help to change that. (To an extent. I mean, the psychos and mall cops are still here among us, but they have company now.)

Of course, people sometimes also get carried away in giving him credit for his role as a paid commentator, like your man Big John here who seems one step away from writing a John Henry-esque ode to the imagined version of Rogan who built the MMA railroads.

And see, I think we can give Rogan his due daps for being an effective early advocate for MMA. Also for being an informed commentator who understood a lot of the intricacies of the sport back when that was a very rare thing. But we should also be able to admit that it ain’t 2008 anymore and he seems less interested and engaged these days, probably for some pretty understandable reasons. (Remember the aforementioned hundreds of millions of dollars?)

The Rogan who shows up for UFC events these days often comes across as way less prepared and informed than some of his colleagues. He seems generally less interested in the low-level minutiae of this sport, which to be fair is constant and almost maddeningly voluminous in a way that could tire out anybody over time. He missed the last pay-per-view, which happened to be one of the best cards the UFC had put together in months, because he was going on a hunting trip. You don’t have to be an Alpha Brain to figure out that maybe this shit is not his highest priority anymore, which would be pretty understandable.

His mere presence still excites a large portion of the fanbase, because to them Rogan on the mic equals a big, important UFC fight night, especially now that he doesn’t bother with the actual UFC Fight Nights. And the fact that he’s rich as Roosevelt now also sometimes means that he can say shit on a UFC broadcast that the commentators with less job security would be scared to say, which can sometimes be refreshing.

But what you can’t do is sit there with a straight goddamn face and tell me he brings the same energy and enthusiasm and detailed preparation that some of the UFC’s other broadcasters do. You just can’t. You take Anik, Cormier, Sanko, Paul Felder, Megan Olivi, Bisping – shit, the UFC has a motherfucking embarrassment of riches to choose from when it comes to commentary – and those people are great at this. They’re also all pretty much only about this life these days, so it makes sense that they’re more focused on it than the dude who has reached Feudal Lord levels of personal wealth.

So couldn’t we just admit that times change? Rogan definitely doesn’t need the UFC anymore, either as a platform or an income source. And the UFC at this point is a self-guided machine that doesn’t need him or any one person. Rogan can still show up for the big events if and when he wants to and it’ll be fine. But the general awesomeness of the UFC 266 experience also reminds us that we can all still have a good time even if he can’t make it that day. Maybe MMA blogs don’t even need to write whole posts solely about the fact that he’s NOT going to be there. Just saying.

Did Rogan play a significant role in helping the UFC get here? Yes. Is it weird to watch him gradually drift closer to Rush Limbaugh territory over the past decade or so? Also yes. Do I blame him for the YouTube algorithm that thinks anyone who watches MMA videos must also want to see some Jordan Peterson bullshit after that? A little. But dammit, we don’t need to be so weird about it all the time. If there’s one thing I’m sure of, it’s that the people who want to will continue to get many opportunities to hear Joe Rogan talk into a microphone. 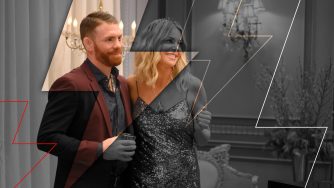