Imagine how perplexing all this must be for UFC President Dana White. For pretty much his entire time as UFC President, he’s operated by one playbook. It’s always worked, too.

If a fighter wants more money, you say he’s scared to fight. If a media member criticizes the way you do things, say no one but you knows anything about this business. Anyone with any critique, valid or otherwise, can be written off as a “scumbag.” Do you even need to explain what makes them a scumbag? You do not. You are Dana White. You just say shit, and a certain contingent of UFC fans will log on to tell you how badass that is right after they send tweets to actual pro fighters calling them pussies and losers.

This is the way the world as you know it works, and it is good. Then along comes this fucking YouTube kid.

By now we’ve all seen this back and forth between Jake Paul and the UFC President. And as you may have noticed, the old man DW is absolutely getting his ass handed to him by the 24-year-old “social media personality” turned pro boxer on the worldwide web. It’s not even close, either. These are goddamn 10-7 rounds at this point. Even Herb Dean would stop this shit now.

The core problem for White is that he is an analog dude who’s been drawn into a fight in a digital world. Paul, who has succeeded as a boxer mostly because of his ability to pick the right targets, has once again chosen wisely in drumming up a beef with an out-of-touch, narcissistic, 52-year-old fight promoter.

Things here jumped up a notch recently when Paul officially Took It To Notes to lay out a list of demands that White had to meet in order to get him to retire from boxing and sign with the UFC. These demands were all geared around fighter pay and treatment, possibly because Paul actually cares about that, but more likely because one of his great talents is knowing how to trigger a motherfucker. The motherfuckers being triggered here are not just White himself but also us, the MMA fans and media. He knew we’d eat this shit up, just like he knew White wouldn’t be able to resist taking the bait.

He was right on both counts. MMA websites did the ol’ Reading Social Media So You Don’t Have To stories around Paul’s list of demands. Then White fired back the only way he knows how – by ranting into a camera like it’s still 2009 and he’s mad at Loretta Hunt or some shit.

The effort White put into this could best be described as minimal. Ever seen one of those Cameo videos from an aging pro fighter or pro wrestler that made you wonder, did he put any thought into planning what he was going to say? Did he know he was allowed to do more than one take? Yeah, it was basically that. Just White holding the phone too close to his face, like he’s FaceTiming with family on Christmas, and talking all around Paul’s points without really addressing any of them. At one point, he tries to shift focus to Paul’s manager, who he naturally deems a scumbag, and he does so by attempting to describe the man before giving him the nickname of “The Warlock.”

After that, he presumably put his phone away and went back to playing Snood, confident that he had totally scorched this kid and put him in his place. Problem solved.

Trouble is, White had now waded obliviously into Paul’s waters. If White had ever actually read “The Art of War,” rather than just sticking the words in giant letters on his wall, he might know that one thing you don’t want to do is fight on your enemy’s preferred terrain. And talking shit to people via internet videos? That’s basically Paul’s whole thing, and he’s pretty good at it.

You guys? This motherfucker is over here on a beach, smoking a cigar and drinking out of a goddamn chalice while he clowns White with Photoshops and actual video editing – even a voiceover pointing out what he claims is a UFO over his shoulder at one point.

Basically White came to this fight with some strip mall karate skills like it’s MMA in 1995 and Paul hit him with a flying gogoplata. He’s in over his head in this kind of battle, and it’s only a question of whether he’ll realize it.

But near the end of this audio-visual battering, Paul did make a pretty goddamn good point. As he put it: “Everybody else needs you, Dana. I’m the only person who doesn’t need you.”

This is a little bit of an exaggeration, obviously, but it’s also kind of true because Paul seems to be the rare figure who can draw in and profit from the UFC’s core audience without having to ever sign with the UFC to do it. You look around every time he fights, and it’s not hardcore boxing fans who are paying attention – it’s us, the MMA crowd. Most people have to go through the UFC to reach that audience, but Paul didn’t. He has money, influence, and an audience that he can take with him wherever he goes. And now that he’s gotten White to take the bait, he’s got an enemy he can mercilessly pick on without it ever feeling like bullying.

Again, you have to credit the man’s target selection. White is a monstrously wealthy fight promoter who got rich by effectively seizing control of an entire sport while it was still in its infancy, which allowed him to go nuts with power in the near-total absence of oversight or worker protections. That’s not a sympathetic figure in our current economic and cultural climate. No matter what Paul says to a guy like that, it’ll always look like he’s punching up rather than down. Even better, it’ll look like he’s doing so on behalf of the poor, exploited fighters in the UFC, whether he actually gives a shit about them or not. Where before he seemed like a spoiled brat here masquerading as a fighter, he now gets to position himself as a workers’ rights advocate using his power to wage war on the greedy capitalist.

It’s perfect, really. And it’s working already. He’s winning over a lot of MMA fans, even if they absolutely hate to admit it. Maybe it’s even a lesson to us all. Want to endear yourself to people who aren’t inclined to like you? Position yourself against someone they dislike even more, and then totally fucking embarrass that person. Tell ya, if that shit ain’t already in “The Art of War,” it ought to be. 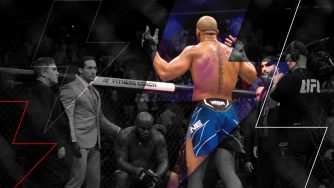 Hey, degenerate gamblers, you ain’t got shit to do, let’s amuse ourselves with these UFC heavyweight title odds

Shoutout to the Big Homie Aaron Bronsteter for sharing some UFC heavyweight championship futures betting lines on Wednesday morning, courtesy of something...